The Nashville Statement versus the bible Part 1. (edited) 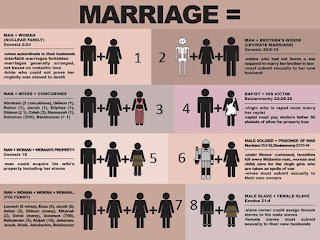 There is a lot of talk about this “Nashville Statement” (NS), but does it hold up to what the bible actually says and teaches? Over the next few weeks I will explore how “off” these evangelicals are in their signing of this ‘hate document”. For starters, we are looking at a Jewish system of belief that forbid the heterosexual men to have same-sex with men… as that is unnatural. It also  prohibits sex in any form  in pagan worship.

WE AFFIRM that God has designed marriage to be a covenantal, sexual, procreative, lifelong union of one man and one woman, as husband and wife, and is meant to signify the covenant love between Christ and his bride the church.

WE DENY that God has designed marriage to be a homosexual, polygamous, or polyamorous relationship. We also deny that marriage is a mere human contract rather than a covenant made before God.


My Response: There are only two verse in the whole bible that remotely states this – but only by interpretation. Jesus states: Matthew 19 (also in Mark 10 the same story):


3.  The Pharisees also came to Him, testing Him, and saying to Him, "Is it lawful for a man to divorce his wife for just any reason?''
4.  And He answered and said to them, "Have you not read that He who made them at the beginning `made them male and female,'
5.  "and said, `For this reason a man shall leave his father and mother and be joined to his wife, and the two shall become one flesh'?
6.  "So then, they are no longer two but one flesh. Therefore what God has joined together, let not man separate.''
7.  They said to Him, "Why then did Moses command to give a certificate of divorce, and to put her away?''

8.  He said to them, "Moses, because of the hardness of your hearts, permitted you to divorce your wives, but from the beginning it was not so.

This verse is not “anti-gay” but anti-divorce. To twist it to mean “anti-gay” means you do not honor the texts context. Jesus is not saying this is the only “marriage” but that a man and woman join together to procreate and stay together and not divorce as they have become “one flesh”. In Jesus day, if a woman was divorced she would have nothing to turn to but prostitution or begging. If a man divorces his wife and leaves her this way then that is the “sin” of this passage and not “homosexuality”.

Meanwhile, marriage in the bible had “polygamous, or polyamorous relationship(s)” all throughout it. You even have King David sleep with, get pregnant, and have murdered, the husband of Bathsheba – and yet, somehow, David is a “man after God’s own heart”. We see the patriarchs have multiple wives, (though it never works out that great). To deny these are also "biblical marriages" that were allowed by God and the Jewish faith is to also dishonor the history and reality the scripture presents.

Even in the New Testament, Jesus never states that a man cannot have more than one wife – but that a man and wife should not divorce as in the passage above. To use this scripture in the way it is on the Nashville Statement is unBiblical and even goes against the teaching of Jesus as one must pervert His words to make it mean as those who signed this trash want to make it mean.

Jesus and Paul never stated a man could not have more than one wife. Paul’s only limitation was that if a man wanted to be a leader in the church he must only have one wife. To make the bible say what it does not is twisting the verses to fit one’s one desires and beliefs… but thankfully the bible does not say what these people claim it to say.

On the idea that marriage is not a contract but a covenant? It is a legal contract and that contract is man-made. Adam and Eve never went before a judge and signed a document. Therefore, with the logic of the NS, Adam and Eve were never married but created for each other so Adam would have a suitable mate. In other words,  Eve was given to Adam to procreate as Adam did not see any other "animals" that would be acceptable. (think about that one - we could be arguing that a marriage between a man and rhino as a traditional marriage.

If we are now "in Christ" then there is no separation of male or female as we are all one in Christ. This verse alone stands against the bulk of the Nashville Statement... of which I will discuss next week.

Bonus: If anyone says I am justifying divorce here, and one person accused me of that, I am not. I am stating that the verse often used to clobber the gay community is not about gay people. It is about divorce and as you can see, Jesus did not like it and neither do I.