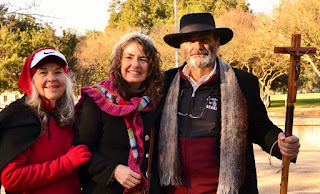 Years ago... I mean like way back in 1983/84 I had the pleasure of hearing Brother Jed and Sister Cindy (the disco queen) do some street preaching. They would show up and shout all sorts of horrible things like, "You dress like a whore" and the female students. They would go on and on about how everyone one was "going to hell". I even heard brother Jed, during a q and a state, "The ONLY godly form of economics is capitalism." Even after the Montana State University police escorted Brother Jed and Cindy off campus they still came back. Even the fellow students began to repeat the catch phrases... "I was a disco queen" and the crowd said it with Cindy... You are all "going to hell"... as the crowd said it with her. If they had not been so obnoxious I might have felt sorry for these two street evangelists.

After a long tirade on how everyone was a sinner and was "going to hell" I got sick of them only saying half the gospel, (yes we are all sinners - who deserve the judgment for our transgressions and I still believe that though I may not agree in how God will do that). I to shout, "Everyone knows they are sinners. They get that... but why don't you tell them how to get saved? Why don't you tell them about Jesus?"

Sister Cindy turned toward me in here religious fiery... and shouted at me.... "You know what you are!?!? You're a marshmallow!"
I laughed and said.... "Tell them about Jesus."