Was Jesus the smartest man who ever lived? 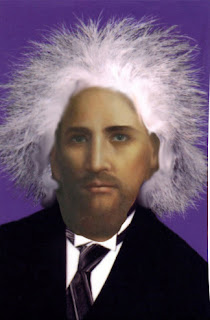 "It is not the strongest of the species that survive, nor the most intelligent, but the one most responsive to change." - Charles Darwin

"The smartest and most intelligent Man I know never opened a book. His name: JESUS He's that Awesome!!" - Jane Rivera via Twitter

My class was discussing whether Jesus was the smartest man who ever lived. This question was prompted by Dallas Willard and for some reason I had a issue with it. The DQ in my class has 16 students and up to this point only three had attempted to answer the DQ. To amuse myself I submitted this.

Because of the lack of participation in the DQ I will begin my personal Socratic dialog in an attempt to meet the attendance requirements.  This in no way is an attack on anyone’s person, but only an attempt to personally work through the reading of this week.  This, in essence, was my own personal dialog as I wrestled with this material. I will be speaking as me, myself, and I.

Me: The issue of Jesus being the smartest man who ever lived seems to overlook the understanding of Kenosis that is taught in the Bible. Jesus emptied Himself and became a man at the incarnation. In doing so Jesus did not grasp at the attempt to be equal with God.

Myself: Then would this make Jesus vulnerable and much as all of humanity?
Me: Yes, in fact I would say that Jesus in His incarnation became “frail” in the sense that He in His humanity and human form was just like all of us. Jesus was much like us except in His complete dependence on The Father.

I: I am not sure I am comfortable with a Jesus that is so--- human.

Me: If Jesus was not human as we are—so to say, the average Joe—his death would not be “for all”. To make Jesus an elitist of attached to any label then means that people not under that label are not acceptable. Much like how we see the labels of political destroying the pure view of Jesus today. If Jesus is a Republican, then there is no way that a Liberal Democrat can be saved. They are not like Jesus that we created under the labeled banner.

Myself: So how does this apply to academia or the “academic calling”?

Myself: What of the post-resurrection Jesus? How does this Kenosis theology fit into that?

Me: Jesus is shown in the Bible to have the same scars he received on the Cross. He showed the pierced hands and feet to Thomas who then put his hand into Jesus side. Jesus retained his humanity though in a different form thus still retained his frailty only in the imperishable and incorruptible form. Jesus was still “human”, but also remember He was the New Man born of Heaven and not tainted with the issue of the degretative self-view we have held onto since the Adam and Eve in the Garden. In this lack of a degretative self-view, Jesus was able to be totally dependent on the Father as He saw things as the Father saw them and did not have the filter of self-blindness that comes with sin.

I: I will have to ponder on this a bit and get back to you.

Me: thanks for listening.