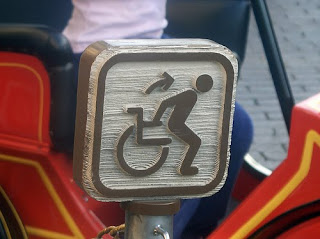 Picture Source
I had a great time in conversation with Rob and Terry Witham. Actually I talked way too much… Yet, as we talked I tried to explain something I have been thinking about for a while. I sometimes do not want to have all the answers… or rather, in some cases, I don’t want to settle on an answer.
Now, the issues I am dealing with often are hot topics. I see that in the case of homosexuality or rather, gay Christians, I do not have an answer. Yes, I can argue both sides of the debate and probably convince others one way or the other, yet… I do not think that is that great of thing. I could just make it easier on myself and just settle on the typical evangelical view, yet in my mind that is not being honest to myself nor is it being honest with other… it would just be easier. I understand fully why many do not even try to untangle the mess this issue has become.
While I was talking to Rob and Terry I realized that if I settled on the issue, I would then start to judge others. If I settled that Gay if OK… then I would judge those who oppose that view as wrong. If I settled that Gay is wrong no matter what, then again, I would be judging those in the Gay community. I see judging others as wrong. (Don’t tell me how inconsistent I am in this… believe me I already know!) I realized (at least for now) that to not have an answer allows me to extend Grace to both sides. I am free to love others as people. While I confess it is harder for me to love those who judge me or even attack me, I do try to earnestly love them. (Again, I know how bad I am at that!) For the time being I am satisfied that I do not know the answer… I used to have the need to know the answer and still do most the time, yet… to have an answer, seems to make this issue harder… and makes me less able to respond to the leadings of Christ Jesus.
I know… some of you will accuse me of not taking a stand… but I have… For now I stand on Love and the Grace of God.

There are certainly worse things to stand on than the love and grace of God!

For what it's worth, I used to think I had everything figured out. The world was oh so black and white and, of course, I knew which was right and which was wrong on every topic. To be honest, I am embarrassed to admit that I used to be that person. Grace was abstract and far too narrowly defined.

Over the years God has allowed me to go through some very difficult times. One result of these experiences is that I have learned to be more gracious and tolerant. Ultimately, it is God who will judge his own servants after all. Sadly, I have not arrived where I would like to be just yet - but there's a whole lot less hubris than there used to be anyway.

May God have mercy.