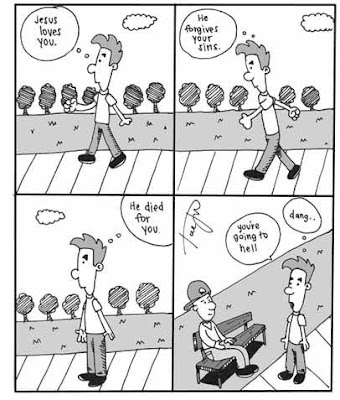 1) How do you model/do evangelism in your faith communities?

1) I model what Jesus did as far as evangelism. He did as the Father was already doing. So I keep my eyes open to what God may be doing in and with someone and just be their friend. Many people only see others as selling or wanting something from them, so developing the skill to love without agenda is crucial. Letting God work in the instead of pushing my own will for their salvation is core to this idea. Trusting that God wants them saved more than I ever would is hard to do at times. Yet, in the times God has allowed me to do this it has been very effective.

2) What ways of evangelism have you found to be least effective? Most?


2) The least effective is door to door and being pushy. Often people are inoculated with the gospel and think they already know all about it and often when pushed shutdown. Again, listening to them and hearing what God is doing with them is a skill to develop. As for me the most effective is #1

3) In what ways do you think/feel that evangelism methods should change for the future of the American church?

3) Often the focus is on me saving others. We may not say that out loud but in reality many times I have encountered "How many people have you saved today?" In the past I felt guilty for not doing enough, then one day I realized (maybe it was revealed to me?) that I could not save myself, so how could I ever save anyone else? It is God who saved me and God wants to save others also. This took the focus off of me "saving" and back on Jesus who can save people. If I am "me" focused then it is about "me" and not Jesus. Also, making the focus not on getting to Heaven but in becoming a New Creation has opened my eyes to being able to just be there and watch God do His work. I am not as concerned about Heaven or Hell as they will get to either place eventually... I focus on how they can have a new identity in Christ Jesus.

Each person is unique but the same. It really does take time to get to know that person and learn how to accept them and love them as Jesus would. I am not saying just be all "nice" as at times Grace is tougher than we think. I have told drunks they are drunks and other harsh sounding things yet, somehow Grace comes through. Often they have never heard directness with acceptance. They have only heard directness with condemnation.

The bottom line is everyone wants to be loved. The world's love is a sick and twisted thing that barely represents God's love. By being a conduit of God's love we can reach people His way and not create other ways that really in the end mean nothing and may work for a generation, yet will lose it's power over time... God's way will never lose it's power.

nice ... and i really identified with the cartoon ...